Recently, President Uhuru Kenyatta, while in Western Kenya during the burial of Hon. Musalia Mudavadi’s mother started a conversation on the presidency not being a preserve of two communities. His ‘handshake’ partner, former prime minister, Hon. Raila Odinga, also urged a rotational type of presidency among Kenyan communities. On his part, the Deputy President dismissed the ‘tribal’ sentiments and argued that Kenyan’s ought to choose a leader based on track record and policy-oriented issues.

Why in Africa, is a president’s ethnicity tied to governance and resource distribution? Can Kenya re-imagine itself and ensure that there is equity for all irrespective of who is in power and their ethnicity?

The president’s ethnic identity and politicization of ethnicity have long been regarded as a powerful force in the politics of many countries across the world, and certainly in Africa. Biegon (2018) argues that in Kenya, for instance, the instrumentalization of ethnicity as the primary means of mobilization has become an inescapable fact of political life.

Since Independence, history records that Kenyans have been voting along ethnic lines in support of ethnic ‘big men’ at the helm of national political leadership and ultimately Kenya’s Presidents.

While Kenya’s Vision 2030 political pillar envisages a democratic political system that is issues-based, people-centered, and result-oriented, President Uhuru Kenyatta’s recent remarks reintroduces the debate: why in Kenyan politics, is the presidents ethnicity elevated than other sub-sets of identity markers such as race, religion, gender, age, and class?

It is also critical to interrogate why ethnic identity has intersected with other political mobilization tools such as gender, youth, religion, and ideology.

One of the clear manifestations of ethnic politics since the clamor for multi-party democracy has been the formation of ethnic parties. Political parties are often overshadowed by their founding fathers (presidential candidates), who also double up as the de facto political heads of their ethnic communities.

The three former and current Presidents: Jomo Kenyatta, Daniel Arap Moi, Mwai Kibaki, and Uhuru Kenyatta, were foremost regarded as regional ethnic kingpins of Kenya’s most dominant ethnic groups of Kikuyu and Kalenjin and later as leaders of KANU and Jubilee coalitions and parties.

Beyond the formation of political parties and coalition building along ethnic lines, weaponization and balkanization of voters along ethnic lines have been essential for winning presidential elections. The incumbents and presidential candidates have exploited the ethnic numeral strength and converted their tribal demographics as bargaining chip information of coalitions during elections.

The specific ethnic background in which the president comes from has historically assumed that the candidate is part parcel of a larger group. In this sense, therefore, the candidate’s electoral victory is translated to be the larger community’s triumph. Equally, the persecution of an individual candidate or a political leader is seen as persecuting their community at large. The International Criminal Court (ICC) factor in Kenyan politics evidenced this reality.

During Kenya’s 2013 general elections, the mention of two presidential aspirants, namely Uhuru Kenyatta of The National Alliance party (TNA) and William Ruto of the United Republican Party (URP) as suspects in 2007 elections violence, was primarily seen as a criminal indictment for the Kikuyu and the Kalenjin communities.

As Kagwanja puts it, with existing previous hostilities between Kikuyu and Kalenjin communities attributed to the post-election violence of 2007/08, the ICC paradoxically became a uniting factor.  The confirmation of charges at The Hague based International Criminal Court against Kenyatta, and his running mate William Ruto became a formidable fault line that helped forge an alliance between the Kikuyu and the Kalenjin.

While the Jubilee Party’s formation in 2013 was meant to unify conflict prone communities in the Rift Valley, Kenyatta and Ruto’s win symbolically signified triumph for the Kikuyu and Kalenjin against the International Criminal Court.

Legacies of ethnic favoritism and skewed appointments in public service

In Kenya, while voting for a presidential candidate does not necessarily translate into direct material benefits to voters, they still vote because of symbolic benefits. The ‘feel-good’ factor‘about having one of their own in charge of the state apparatus or a public office is a psychological status symbol.

Studies have shown that political power exercise often translates into ethnic hegemony because ―where there are ethnically dominated party systems; one’s ethnic group is either in or out of power. To be in power means to have  access and use (or misuse) state authority to channel public goods, resources, services, and other benefits almost exclusively to one’s ethnic group or to the relevant alliance of ethnic groups. It also means that public service appointments are significantly influenced by ethnic identity as patronage and favoritism take center stage in appointments and recruitment.

Biegon (2018)explains that Kenyatta and Moi’s previous regimes applied this ‘stick’ and ‘carrot’ approach during their tenures. State resources and services were channeled to and concentrated in regions inhabited by ethnic communities that were perceived to be in the good books of the president, the government, or the ruling party.

It was, and it is still common for political and community leaders of various ethnic groups to visit the president to pay homage, present their grievances and seek state intervention and fringe benefits. In response, the president would issue a directive, for example, for a specific infrastructural development to be initiated in the region occupied by the visiting delegations.

Recent cases of runaway corruption, nepotism, skewed public appointments in public services, and government agencies can be attributed to favoritism and historical legacy of skewed ethics appointments by previous regimes. For instance, a report published by the Star newspaper on 27th January 2021 on the Public Service Commission (PSC)’s latest Job Audit on the ethnic representation in Kenya revealed skewed ethnic imbalance that seems to favour the Kikuyu and Kalenjin ethnic communities.

Correcting the ills of negative ethnicity in governance in Kenya, requires direct intervention and robust reforms in policies, administration, and legislation frameworks in Kenya.

The handshake and the building bridges initiative

Marked by an acrimonious campaign period, a Supreme Court annulment, boycott of the second round of presidential elections by the opposition, the 2017 general election cycle proved to be one of the most divisive in Kenya’s recent history, coming close to the chaos witnessed in the 2007 elections.

Nevertheless, on 9th march 2018, Kenyans received unexpected news.  Raila Odinga and Uhuru Kenyatta, who were at the helm of 2017 divisive elections, put their differences aside and united the country through a ‘handshake’. This marked a public declaration to cease all hostilities and instead find common ground to restore Kenya’s economy and political unity post-2017 elections and chart a bright future in the Kenyan governance system.

The handshake translated to Building Bridges Initiative (BBI), composed of a 14- member technical committee tasked with traversing the country and conducting public discussions with Kenyans on a 9-point agenda. The 9-point plan is believed to cure the long-standing destabilizing factors in so far as Kenyan political and economic stability.

They include ethnic antagonism, lack of national ethos, inclusivity, divisive elections, security, corruption, and shared prosperity and responsibility. The BBI is an opportunity for Kenya to restore unity and peace and ensure good governance and equitable distribution of public resources.

For example, the BBI proposal of having the winner from a party or coalition with the majority of votes, MPs, and senators declared as the president, and the runner -up as the official opposition leader, would accommodate the opposition party members in the National Assembly and Senate and facilitate their participation in governance affairs by checking on the government.

Additionally, it will remedy the winner- take-it-all- syndrome, and ensure distribution of roles at the national level. Having an expanded executive with the president and the deputy and the prime minister with two deputy prime ministers appointed by the president, will decentralize executive powers formerly accorded to the presidency to other proposed state and government organs.

As of 2013, the Political Parties Act’s enforcement categorically barred the formation of parties mostly on ethnic composition. It also required that all political parties to possess a ‘national character’.

In further compliance with the Act, the political parties in seeking full registration must demonstrate the following:

Therefore, this legislation compels presidential candidates seeking an elective position to de-ethicize their political parties’ membership and ensure their running mates and other party leaders do not come from their ethnic communities.

One other way that the Constitution of Kenya (CoK) 2010 has tried to deal with the enduring legacies of ethnic politics is through the devolved system of government in Chapter 6. In this context, devolution shall be as an institutional mechanism for marginalized ethnic communities’ political inclusion.

Article 174 of the Constitution provides that the objectives of devolution include: fostering national unity by recognizing diversity; recognition of the right of communities to manage their affairs and to further their development; and protection and promotion of the interests and rights of minorities and marginalized communities.

To devolve power and functions from the central government to 47 counties means to reduce tension, stiff competition, and ethnic mobilization at national levels and ensure delivery of services and development at the local levels.

The 2010 Constitution contains relatively bold provisions aimed at tackling patronage and ethnic favoritism in state governance. At the national level, the state organs are required to make their services available to all parts of the country.

The Constitution also requires the composition of the national executive to reflect the regional and ethnic diversity of Kenya’s people. The 2008 National Cohesion and Integration Act (NCIC Act) is another provision that ensures equity in public service.  As one of the 2007/08 post-election Agenda 4 Act provides that public institutions should not have more than one-third of their staff from the same ethnic community. If implemented, these acts will successfully remedy the history of ethnic and skewed public appointments.

Although it may be too early to conclude that the president’s ethnicity factor has purely dominated Kenyan politics in Kenya, new identities of gender, religion, and youth are increasingly weakening and challenging the dominance of ethnic identity in Kenya‘s political sphere.

Moreover, performance and policy considerations are gradually becoming crucial determinants of voter behavior as epitomized by the Deputy President William Ruto’s assertions that voters in Kenya should consider an individual policy and record of accomplishment instead of the candidate’s ethnic origin.

Additionally, The Kenya’s Vision 2030 envisions an issue-based politics, as opposed to ethnic politics. Therefore, the Kenyan elections should revolve around central issues such as providing basic needs, infrastructural development, unemployment, corruption, and leadership quality, as articulated in Chapter Six of Kenya’s 2010 Constitution. 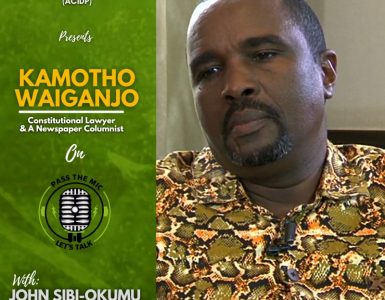 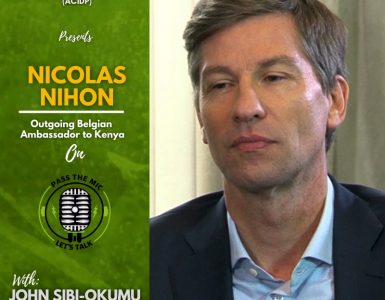 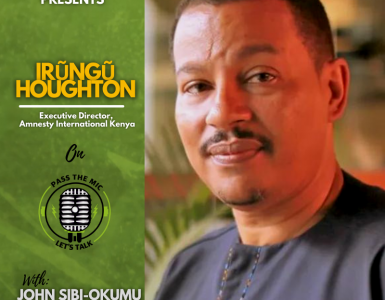 Safeguarding the Annual 2.5 Percent of the National Budget